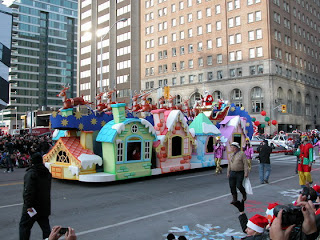 My father at the Grace Hospital  for  his Rehab, pointed out to the  daily paper proclaiming Santa coming to town and his elaborate route . ''Don't miss it'', he said .

Along with thousands of Santa fans I was there with my brother at Bloor and Avenue Street near the Royal Ontario Museum to witness the slow march parade consisting of  60 floats and 22 Bands.
The star attraction were the children who were all over the place in their colourful outfits bundled up for the north wind .Cheering their lungs out enthusiastically as each float came into view... their clear  voice and crisp laughter  completing the  colourful  event to perfection. Candy canes were tossed at the excited crowd who had lined themselves along both sides of the road armed with  their folding chairs and coffee mugs ,with their children in strollers with sufficient supplies of goodies .

Kids young and old dropped off post cards and letters ....their  destination ....One....The North Pole...The Canadian Post  at their service! 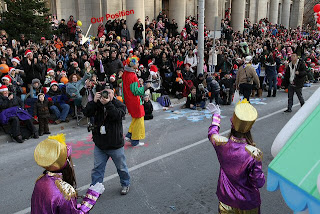 My brother along with many others was busy shooting to preserve the moments with his camera .The festive mood rant the air with Bands playing the Christmas carols which even I found  myself humming swaying to the beat ....Could feel Christmas in the air .....

A lady  Santa surprised us by coming in before Santa  Clause   but it was he indeed  who got a deafening welcome from one and all .....with this tiny wish in our hearts that he must have spotted us in the crowd of his admirers and would surely send the gift we so keenly desire. Believe me the child in us came to the fore!It was such a wonderful moment!Make sure you are there to meet and greet him next year !
Posted by The Chatter Blog at 16:03